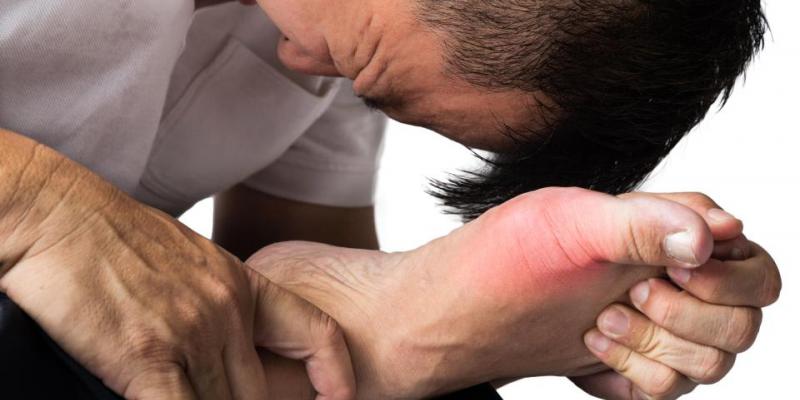 You wake up to a throbbing pain in your big toe.  You feel like it is on fire.  Even the touch of the bedsheet drives pangs of agony to your swollen, hot, tender joint.  There’s little doubt; you have gout.  Gout is inflammation of a joint caused by uric acid crystals. When these crystals deposit in the joint or soft tissue they cause irritation, swelling, heat, pain and joint stiffness.  While gout can affect any joint, it most commonly affects the large toe (this is called Podagra).

Gout can affect anyone, but there are risk factors which increase the likelihood. People with family history may be more likely to experience an attack as genetics plays an important role in our ability to clear uric acid from the body. Similarly, it is more common in adult men.  Being overweight increases the risk of developing gout as does drinking too much; alcohol interferes with the removal of uric acid from the body. Weaker kidneys are a common cause of gout in older people. Other medical problems that contribute to gout include:  high blood pressure, thyroid disease, psoriasis and some types of cancer.  Certain medications can also increase the incidence of an attack: Diuretics (often called water pills), low dose aspirin, niacin, cyclosporine and levodopa are more common examples.  Foods rich in purines, which are the building blocks of uric acid, may raise levels of uric acid. Purine-rich foods include certain seafood and red meat. Fructose found in soft drinks may also increase amounts of uric acid.

Treatment for gout is twofold: reduce the immediate pain and swelling and prevent further attacks.  Acute treatment most often involves prescription of non-steroidal antinflammatory drugs (NSAIDs) such as indomethacin. NSAIDs carry the risk of increased bleeding and stomach irritation. Colchicine, which also helps, is a medication derived from the meadow saffron plant that has been used since 1500 B.C.   It is most effective if given early, but is limited due to its side effects of nausea and vomiting. Lifestyle changes can help prevent attacks or your doctor may prescribe a medication to keep uric acid levels in check.  Non-pharmacological treatments include: rest and ice as well as increased fluid intake and avoiding alcohol.  Take care of yourselves and each other.

What’s in a name? Would a vaccine by any other name work as well? — By Steve Bond Previous Post